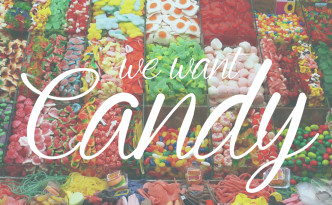 America's love affair with candy began a century ago during the First World War, when candy makers shipped blocks of chocolate to Army training camps where the blocks were cut into pieces and distributed to the soldiers. This is where the idea of individually-wrapped bars comes from: after the war, the candy makers continued to market their product in that form commercially. At the time, most candy bars cost a nickel, and it was not until the 1960s that the price doubled to a dime. Since then, the price of candy bars has steadily increased, but the consumers of candy products have kept pace.

7.7 Billion Pounds of Candy Each Year

Today, Americans consume 7.7 billion pounds of candy each year. Even during the downturn in the economy following the financial crisis of 2007, the candy industry expanded. According to the National Confectioners Association, retail candy sales reached $24.5 billion in 2008. Americans, it is safe to say, love candy.

These statistics are important for those of us responsible for raising funds. In good times and bad, we look for reliable sources of income. When we cannot count on outright donations or public sources of funding, we need get creative and work hard to support our activities. Give those stats on candy consumption in America another look: it's a sure thing.

While the industry has grown, a number of states have passed measures restricting the sale of candy in schools. Several states ban junk food from school vending machines - and there are good reasons for caution. There is ample evidence from medical science that sugar is not a healthy food choice - duh!

So, we are faced with a conundrum: there are restrictions as to where candy can be sold, though people want candy and they will buy it.

Guilt-Free SnacksMany groups have qualms about asking their volunteers - often children - to promote candy. They would prefer to encourage their members to promote snacks that are also good for our health.

Well, you can sell both! Fundraising.com suggests a number of delicious alternatives to the traditional line-up of candies and chocolates. For example, we've got a nuts fundraiser: offer supporters a wide range of snacks, including Cashew Halves, Salsa Mix, Mixed Nuts with Peanuts, Gourmet Popcorn, Classic Cranberry Trail Mix, and much more. Guilt-free snacks for a guilt-free fundraiser!

Some supporters cannot resist candy (we count ourselves among the weak willed) and most people allow themselves guilty pleasures. The guilt that goes along with giving into temptation can be gently appeased by the knowledge that one is helping a deserving cause: a little sin for a noble cause!

Candy fundraisers can also be added to any other community event. Wherever people gather for an event, it's easy to set up a booth with any type of snack - healthy or otherwise - that the participants can purchase in passing. A complementary way to support any fundraiser! Give us a call at 1.800.443.5353 to order your candy!